Indigo – the colour of the sky and sea

Written by Sharon Taylor-Offord for Friends of Te Papa Published on 10 Oct 2019
Shani and Joji like to support the revival of Indigo by socially and environmentally conscious individuals.
Indigo – the colour of sky and sea. Nil, Xigulite, Ali Zome, Aro; India, Japan, China, Nigeria, Vietnam and Indonesia. Cloth dyed with indigo has been traded around the globe over centuries to ‘dress us in blue’. When you pull on your blue jeans you are benefitting from ‘a very mysterious and peculiar transformation’. A seasonal green plant (which will show traces of blue when the leaf is scratched) is magically transformed after harvest using various recipes and formulas honed since antiquity in differing locations. 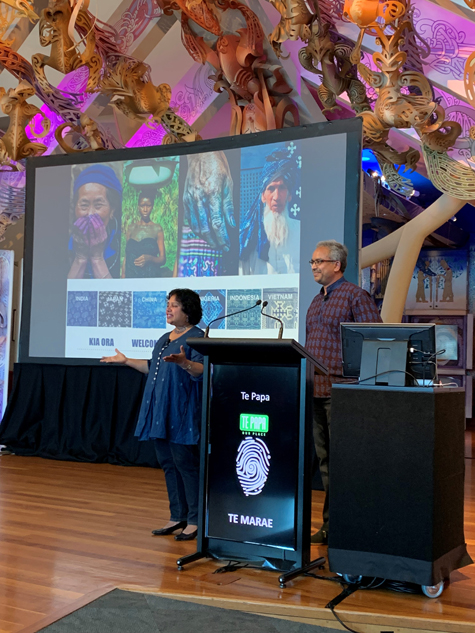 Presenters Shani Pillai and Joji Jacob presents ‘Colour Me Indigo’ to Friends of Te Papa audience
Shani Pillai and Joji Jacob’s roots are in India, they are Kiwis at heart, proud Wellingtonians and Friends of Te Papa. After the success of their earlier Threads of Tradition talk, they returned to give us the WOW season of 3 in-depth multimedia talks, the first of which, Colour Me Indigo, took place on 26th September in Te Marae. ‘Blue gold’ was the name given to the indigo cakes taken back along trade routes to Europe to became ‘the colour that changed the world’ – a myriad of uses from medicinal to cosmetic to artistic in addition to its use in clothing. Japanese firemen once wore kimono dyed with indigo for its fire-retardant properties; turbans were dyed indigo due to its cooling effects. Huge demand for all the possible tones of the blue saw the development of synthetic indigo c1883. This process, which uses cyanide, allowed for commercial production and sale in Europe and resulted in the death of the natural trade in indigo. It became a forgotten art until the last 40 years. Now interest in conservation has led to the revival of old techniques, with more and more artisans engaging in the safe natural manufacture of indigo. Shani and Joji like to support this revival by socially and environmentally conscious individuals. They share what they have learned through talks, by taking tours, and via their website. They created a link to accompany the Indigo talk so that we, and now you, dear reader, can benefit from this, at www.atitravel.nz/indigo. Sharon Taylor-Offord Committee Member, Friends of Te Papa